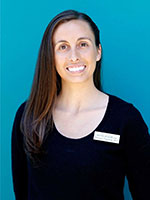 Dr. Kathryn Enegren is a licensed Physical Therapist who holds a Doctorate in Physical Therapy. Dr. Enegren has experience working with patients that not only have had orthopedic injuries or surgeries, but also various neurological issues. She has been with Vargo Physical Therapy as a practicing clinician since 2012.

Even as a competitive soccer player and high school athlete, Dr. Enegren knew she wanted to be a physical therapist to help return patients back to sports, work or to a specific prior level of function. She received her Bachelor’s degree in Kinesiology and Exercise Science from California State University, Northridge in 2008. She then went on to complete her Doctorate in Physical Therapy in 2011 at the University of St. Augustine for Health Sciences in San Marcos. She is an ASTYM certified clinician and has been a member of the American Physical Therapy Association (APTA) and the California Physical Therapy Association (CPTA).

Dr. Enegren was born and raised in Moorpark and enjoys giving back to the community in which she grew up in. She initially met her husband in high school and they were married in 2018. They welcomed their first child, a daughter, in 2021 and are excited to watch her grow up in the community which has given them both so much over the years.